Objective: A known sesquiterpenes β-Eudesmol (beta-Selinenol) the main components of essential oil of Warionia saharae have been isolated from the hydrodistillation extract leaves. The essential oil components was analyzed and identified by GC-MS spectroscopy.

Methodology: The main chiral component has been chromatographically purified by TLC and GLC by analysis of their spectroscopic data (GC-MS, IR) and by using vibrational circular dichroism (VCD) spectroscopy associated with density functional theory (DFT) calculations to confirm its structure and absolute configuration.

Results and discussion: VCD has attracted increasing attention in recent years; it is a definitive method, commonly used in the absolute configuration of natural products. While the most of major components of the essential oil of WS are optically active molecules such as β-eudesmol, we carried out in this work a comparison between the observed spectra of the essential oil and VCD spectra reported in the literature of each pure enantiomer.

Warionia saharae Benth. & Coss. is a monotypic genus of the family Asteraceae. It is endemic to the northwestern African desert, Morocco and western Algeria [1,2]. This plant is known for its distinctive scent [3,4].

According to the previous reports, the major chemical components of Warionia saharae are polyphenols, tannins, coumarins and mucilages, sesquiterpene lactones, volatile oils and a low concentration of flavonoids and sterols from stems,leaves and flowers [5,6]. Other reports have agreed that the essential oil of W.S comprised a β-Eudesmol, Linalool and trans-Nerolidol, as main components [7-10]. The essential oil of Warionia saharae was reported for the first time by Raumant in 1985 who isolated and identified only three constituents: Eudesmol (42.25%), Nerolidol (17.26%) and Linalool (8.63%) from the leaves and flowers [11].

Due to the wealth of essential oils with chiral compounds, chiroptic methods; which are the most important and popular tools, such as circular vibratory dichroism (VCD) [12-15], can provide a powerful approach for determining absolute configuration (AC) of natural products. In this study, we revealed for the first time a comparison of the signs and intensities of the measured VCD spectrum of the crude Warionia Saharae essential oil (WS-EO) with the corresponding theory calculated VCD spectrum of the individual spectra of pure enantiomers of the major chiral compounds present in the EO which represent more than 5%.

β-eudesmol, is a bicyclic sesquiterpene alcohol which is commonly found in nature. It plays an important role in the stereochemical correlation of terpenes and steroids [16]. It has several pharmacological activities which could serve as precursors for many biologically active derivatives. The anti-inflammatory effect of β-eudesmol has been recently reported [17,18]. Therefore, Warionia saharae is used for the treatment of inflammations in traditional medicine [19].

Aerial parts of Warionia saharae were collected from the mountains of the Bechar region (Djebel Bechar). Plant was identified based on the A.N.N (National Agency Nature protection- Bechar, Algeria) [20], and voucher specimens were deposited in the herbarium of MBSC (Bioactive Molecule and Chiral Separation Laboratory), university of Bechar, Algeria under N=° 02/07. The leaves were kept at ambient temperature, let dry naturally and protected from light [21].

Dried leaves of the Warionia saharae was subjected to hydrodistillation for 6h. Resulting essential oils were dried over anhydrous sodium sulfate. An aliquot of the sample of essential oil was obtained and stored in the refrigerator at 4°C, in sealed vials for further experiment.

The essential oil and the isolated compounds were analyzed in a gas chromatograph coupled to a mass spectrometer GC-MS (CW20M) and by GC-FID (DB-5) on Shimadzu gas chromatograph based on their Kovats (IK) indices. The target compounds were identified by GC retention times and from their mass spectra. The retention indices of the various constituents were calculated with respect to the retention times of a series of n-alkanes (C6-C44) injected under the same conditions with the essential oil.

Isolation and Identification of the β-eudesmol

W.S essential oil was used to obtain beta-eudesmol major compound, it has been subjected to column adsorption chromatography (CC).

Fractionation of the essential oil extract is done in several times to have good results and to confirm the results obtained.

The recovered fraction is re-analyzed by gas chromatography GC-FID, identified by comparison of their retention indices (IK = 1654 (DB5)) with those published in the literature and even sites on the web that provided a large database referenced and grouped by column type, for example: The Pherobase [22], followed by IR spectroscopy analyze to confirm their identity.

Fourier Transform Infrared (FTIR) technique has been successfully used as a tool to confirm the chemical structure of the separated compounds.

The FT-IR absorption spectrum was recorded using the AVATAR 320 apparatus, in the range of 4400–400 cm− 1, by spreading the essential oil diluted with carbon tetra (CCl4) on a KBr disc.

Both IR and VCD spectra of essential oil were measured on a FVS-6000 (in a 200 µm BaF2 cell at concentration of ca. 0.075M). The measurements of VCD spectra, has extending the range of 750 to 4000 cm-1. CCl4 was chosen as the solvent, for best solubility and weak absorption in the region of interest. A baseline correction was performed by subtracting the spectrum of the solvent acquired under identical conditions.

The main chiral molecules in essential oil of Warionia saharae are β-Eudesmol (32.87%), Trans-nerolidol (5.31%), Linalool (4.99%). Theoretical modeling of the VCD spectra of major component is built with the Spartan 08 (Wavefunction, Inc, Irvine, CA) software, and their absolute conformational searches were carried out using the GAUSSIAN 09W calculations in an energy gap. Single-point DFT calculations of all conformers were done using the B3LYP functional and the 6-31G (d) basis set implemented in the same software package, which retained the nine conformers of β-Eudesmol. Further conformational optimizations were performed using the GAUSSIAN 09W program system. The final structure, conformational stability, geometry optimization and vibrational frequencies of β-Eudesmol have been investigated using density functional theory DFT-B3LYP methods with the 6-31++G (d) basis set. The Mulliken atomic charges of the title molecule were also performed using the DFT method.

Peak: From the IR spectrum (Fig 2a) grouped, a broad characteristic band at 3432 cm-1 of the saturated hydroxyl group O-H absorptions. In addition, thin and intense bands were observed at 2929-2847 cm-1 zone corresponding to the CH2 and CH3 linkage stretching vibrations. A characteristic absorption band in the1460-1378 cm-1 region indicated the deformation of CH3, CH2, and even deformation OH bond. 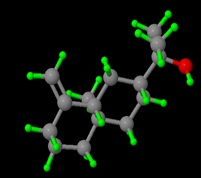 Figure 1: The GAUSSIAN structure of Beta-eudesmol.

IR and VCD of pure samples

The VCD method of analysis involves comparison of the experimentally measured VCD spectrum to the one calculated from ab initio quantum chemistry.

The essential oil of WS was submitted to preparative TLC analysis. The major compound β-Eudesmol was separated and analyzed by GC-MS and IR technique.

The absolute configurations of the four major compounds of WS-EO were determined by VCD measurements combined with DFT calculation of VCD using Gaussian 09W with B3LYP functional and 6-31G(d) basis set figure 2. 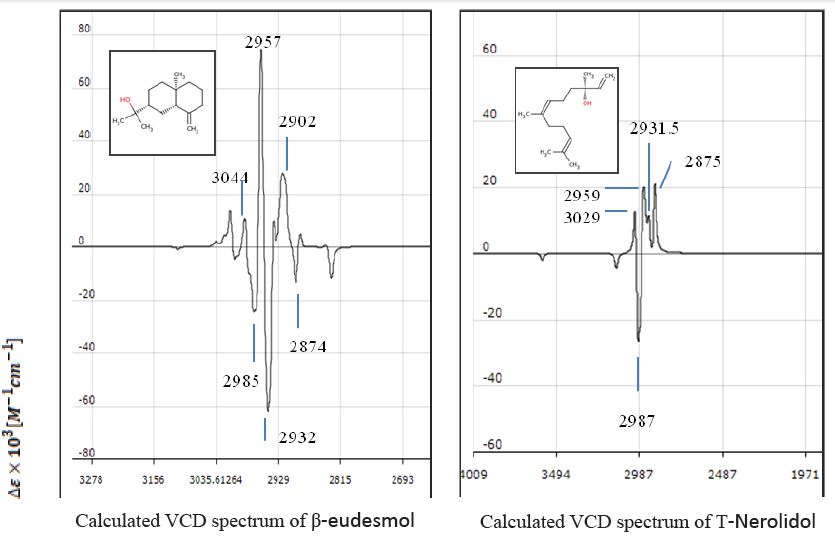 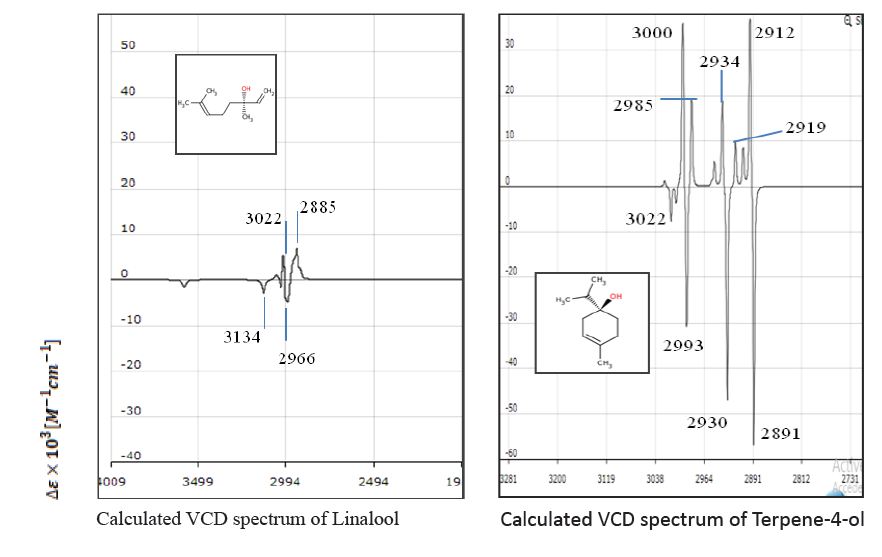 Typical VCD spectra of essential oil of Warionia saharae is presented in figure 3. The general shape of the experimental VCD spectra is in excellent overall agreement with their major compounds.  It represents a similar profile as their main constituents figure 4.

Figure 4: The VCD spectrum of the essential oil is similar to the spectra of their main constituents

The VCD spectra of EO and theoretical spectra (Figure 5) were very similar.

The negative band at 2932 cm-1 was most intense for EO attributed to the major compound; β-Eudesmol (42.25%). In the same way, the positive bands at 2902, 2954 and 3044 cm-1 and negative bands at 2874 and 2985 cm-1 characterize β-Eudesmol -[(2R,4aR,8aS)-VCD spectra, a good agreement was found between the calculated and experimental spectrum. Same agreements were observed between EO experimental measured VCD and calculated VCD spectra for all the other compounds. The comparison of VCD spectra are contrasted in figure 5. 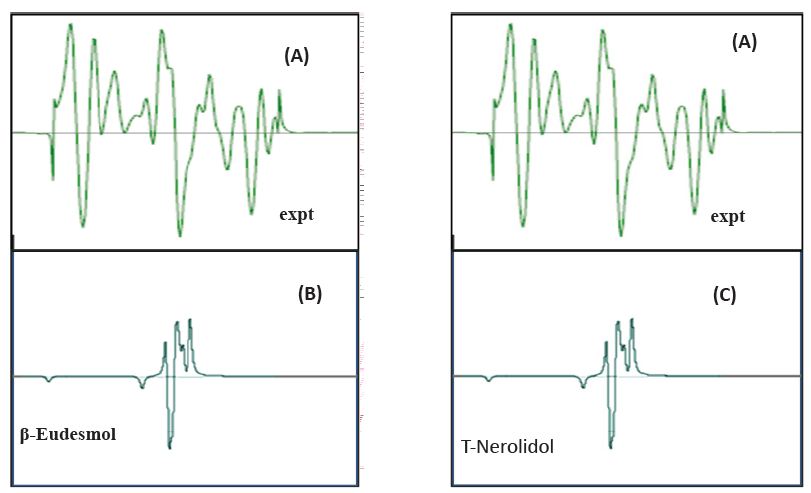 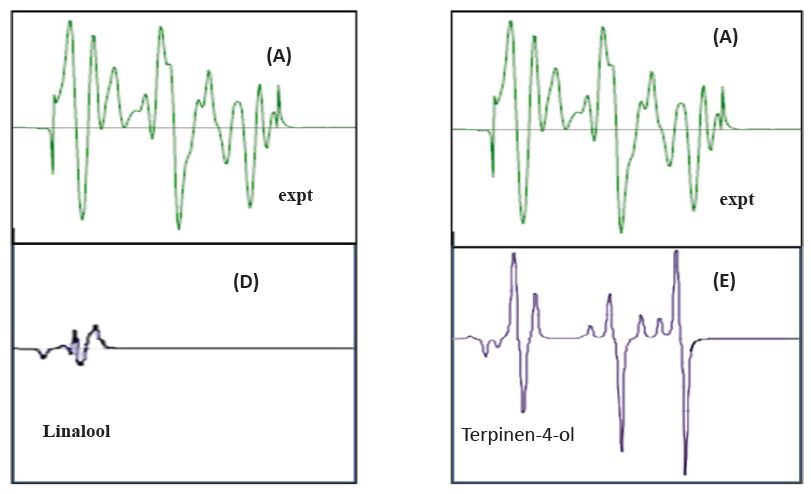 Thus, the negative band at 2932 cm-1 and the positive band at 2957 cm-1, which represent the most larges and intense bands in experimental spectra of EO, are attributed to β-eudesmol and T-Nerolidol, the two major compounds, which meet in the same position, A moderately negative band as observed in the region 2985 cm-1 for the measured VCD spectrum of EO accredited to the negatives bands for among the β-eudesmol and T-Nerolidol, and a positive band for Terpine-4-ol in identical site.

The last VCD experimental spectrum bands at 3000-3022 cm-1 have a satisfactory agreement and correspond in a manner similar to the bands observed in the calculated VCD spectra for Linalool and Terpinen-4-ol.

Comparison of the individual conformer VCD spectra with the observed spectra often leads to the identification most important conformers, the four compounds assigned as follows:

This result was in good agreement with the result of GC-MS. We conclude the spectral signatures of the EO present similar profiles as their main compounds.

Theoretical calculations were compared with that cited on the Mol-Instincts website the Database for Chemical Property Information [23]. Next, the experimental and calculated VCD spectra should be compared to assign an absolute configuration. If the sign and relative intensity of the observed bands in the VCD spectrum of the sample are the same as that of the calculated spectrum, the AC of the sample is the same as the AC chosen for the calculation [13].

The determination of the absolute configuration is a major goal in stereochemical analysis and is an important step in any field related to chirality, especially in the pharmaceutical industry [13].

In this study, absolute configuration of each enantiomer was determined by comparing the experimental VCD spectra with the output of quantum chemistry calculations.

In a first step the Vibrational Circular Dichroism (VCD) spectra of the crude essential oils were recorded, and in a second step the absolute configuration were confirmed by comparison of experimental results of WS-EO and calculated VCD spectra of the individual spectra of pure enantiomer of the four major compounds namely of  β-Eudesmol , T-Nerolidol, Linalool and Terpinen-4-ol.

All values are in excellent agreement between the calculated and experimental VCD, especially with the absolute configuration of β- Eudesmol isolated major compound from Warionia saharae.

This work extends for the first time the isolation of an important sesquiterpene and the confirmation of its absolute configuration. It has been a synthetic target for many researchers.

The authors declare no conflict of interest.

Copyright: Yakoubi M, et al. © (2021). This is an open-access article distributed under the terms of the Creative Commons Attribution License, which permits unrestricted use, distribution, and reproduction in any medium, provided the original author and source are credited.

Open Access by Magnus Med Club Ltd is licensed under a Creative Commons Attribution 4.0 International License. Based On a Work at magnusmedclub.com